The Things I Make Lyric Book 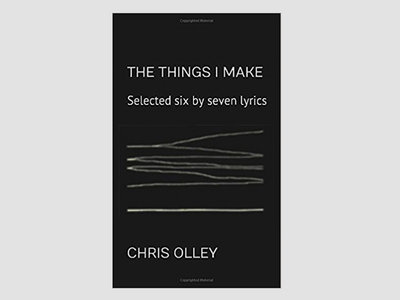 Comprehensive paperback lyric book with 51 songs of six by seven lyrics and an essay on each songs meaning and history and recording process.

This book contains a comprehensive foreword, over 50 six by seven song lyrics and the last section is made up of essays about each song, the songs' meanings and stories behind them. 20 years on, Olley’s targets have only become more firmly entrenched. The lacerating invectives of “Eat Junk Become Junk” leave fresh wounds at a time when a trash-TV huckster has moved into the White House, and while “Sawn Off Metallica T-Shirt” may deal in white-trash caricature, its dirtbag protagonist’s delusions of grandeur (”Lenny Bruce Lee Marvin Gaye - I’ve got style, and I’m misunderstood!”) ring all too familiar in an era of toxic, #GHBTP-grade masculinity and #alternativefacts.Chris Olley’s lyrics hold out hope to commune with the masses, sometimes with anger but always with a flair for the melancholy and an impassioned appeal to the heart.What makes his lyrics more than just a delirious dive through modern life’s rubbish is his desire to forge an emotional connection with those who feel weighed down by it.You’re probably holding this book because you’re a fan of Six By Seven and you want to know more about the band’s songs: how they were written, and why. Well,to paraphrase something Neil Young said to me, “If you’re looking for that kind of thing, this is the place to go.”The first Chris Olley lyric I ever heard was: “It’s good to be someone/To feel like you belong.” Easier said than done, but those sentiments are eternal. Anyone who’s ever obsessed over music and puzzled about life will find some companionship herein.Chris is a brave writer, and the real deal. He writes a song about addiction, and then receives an email from Mark Lanegan telling him he’s nailed it. Between the lyrics and the explanatory notes, there’s a lot of beauty and chaos, ugly truths and no easy answers. But like he says in Colder: “I won’t ever give up…” The Things I Make is worth the journey. They do have the most beautiful shape. Keith Cameron - MOJO

ships out within 5 days